Over forty years of classic hits are performed with the energy of an actual Stones concert performance. The show also includes an acoustic set of popular hits such as "Angie" & "Wild Horses". Lead vocalist, Chris LeGrand, who portrays the flamboyant Jagger role states "this show appeals to Stone's fans of the past and present". "All the big hits are here" he adds. "Honky Tonk Women", "Start Me Up" and of course the band's signature classic "(I Can't Get No) Satisfaction" will be heard.

Formed in the winter of 2000 "Satisfaction's" goal was to create the nation's first full time touring production to the Worlds Greatest Rock & Roll Band. National touring quickly brought the show fan and media acclaim in newspapers, magazines and television across the country. Performing shows at fairs, festivals, casinos and corporate events with such headliners as Ratt, Joan Jett, Starship, Sammy Hagar, Lynryd Skynryd, Jackal, Nazareth, Foghat and more solidified the show's national status. This show has also become a major draw on the college circuit performing for some of the top universities in the country. In 2001, "Satisfaction" performed select dates at IMAX theatres in conjunction with The Rolling Stones re-release of their classic concert film "Live at the Max".

In 2005 Satisfaction became the first Rolling Stones show to debut on the Las Vegas strip. As part of the world renowned show, "Legends in Concert", the group was honored with outstanding reviews in their six month run. Las Vegas Today proclaims "They shined just like the real Stones". The Las Vegas Sun writes "They have you in the aisles like Jumping Jack Flash". 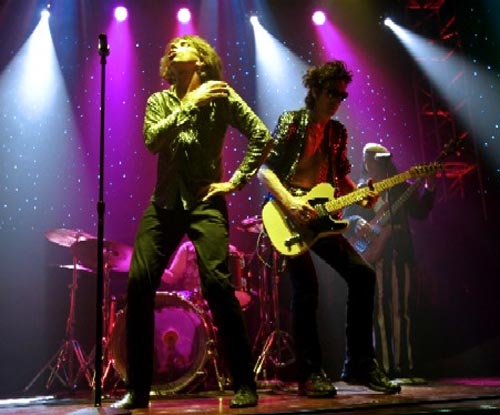