Long Island, New York native Russ Merlin is known as one of the premier corporate entertainers in the world. Merlin has wowed audiences from over 50 countries, including multiple private events for members of various royal families as well as having performed in some of the most historic theaters on the planet. It's no wonder he managed to become one of the most well respected entertainers around.

Russ Merlin is one of the few performers who has done it all, from cruise ships to Carnegie Hall and even performed his unique brand of comedy for the Queen of England. Russ has one of the best acts around, offering up physical prop comedy paired with unique stunts, a little bit of magic and a ton of laughs. Merlin was even selected to perform at the Water Festivals in Cambodia and Laos, to which he takes the title of the first American invited to perform at the festivals in over twenty five years.

Merlin is one of the most sought after entertainers in the corporate circuit, having a client list that includes BMW, Intel and Sony to name a few. Merlin has also been lucky enough to perform along the side of popular acts such as Bob Hope, Joan Rivers and even Rod Stewart. Russ now calls V Theater home, serving as one of the key acts in V - The Ultimate Variety Show. 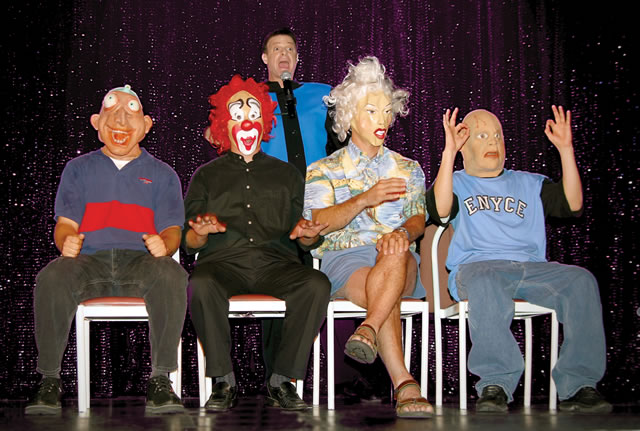