KING OF DIAMONDS (TRIBUTE TO ELVIS AND NEIL DIAMOND)

When does an ordinary event become an extraordinary event? The answer to this question lies in the remarkable talents of Mr. Doug James, the unquestioned "King of Diamonds"! Doug has toured the East Coast for over 25 years as the band leader for the fabulous LEGGZ band out of Richmond, VA. What started out in 1999 as a floor show tribute act to Neil Diamond has developed into a full blown, highly requested tribute show with all the bells and whistles. After adding the Elvis Presley tribute several years later, this highly interactive, entertaining show has become all the rage up and down the entire East Coast. The idea is to pay tribute to two of the world's greatest performers in a format that can be catered to your functions needs. Both shows are designed to work in a variety of different situations. There are shows ranging in time from 15 minutes to one hour depending on your particular desires. You can use both tribute shows in one event or have two shows with one tribute act as well. This show can be a track act or come come complete with a full band or a DJ. It all depends on what your event requires. Make your next function "extraordinary" with the magnificent Doug James' tribute to Elvis and Neil Diamond! It's always a "night to remember" with THE KING OF DIAMONDS! 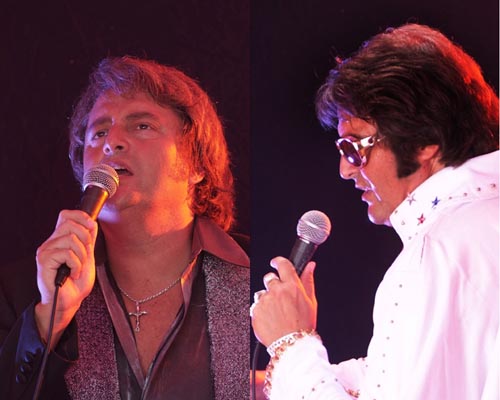 He was FANTASTIC!!!! He was here early, set up on time, and the crowd LOVED him - it was definitely his ability to pull it out of them... it started a...

He was fabulous and everyone loved it. I personally loved the Neil (Diamond) best. He moved around the room and got everyone involved. We just danced,...

Ask questions, check availability, and get pricing information for KING OF DIAMONDS (TRIBUTE TO ELVIS AND NEIL DIAMOND)