Dynamic, Intense and Passionate are just some of the words used to describe the innovative work of instrumental guitarist and composer, Dominic Gaudious.

Often compared to Michael Hedges, Eddie Van Halen and Al DiMeola, Dominic's appealing sound has been featured on Echoes, Hearts of Space, National Public Radio and many local and syndicated stations throughout the world.

Ken Anoff is a master percussionist and music educator with 30 years of musical training that has taken him around the world performing, teaching and studying. He received a BA in music from the University of Maryland - graduating with honors and awards for outstanding achievements in music - where he subsequently taught for eight years as an adjunct professor and assistant to the head of the percussion department. He also collaborated extensively with the dance department, accompanying dance classes and performances and teaching rhythmic training courses to dance students.

Ken then worked for several years in the Maryland public school system, offering special programs on world music to students of all levels with his group Nada Brahma. An excursion to Guatemala interested him deeply in Latin music and culture, and he spent over two years in Central and South America, studying the language and music and performing with the folk ensemble Sol Latino. His journey then took him to Japan, where for two years he taught and developed the percussion curriculum at the Fukuoka School of Music, a technical college in southern Japan.

He continued three more years in Japan, working with a large number of Latin groups from many diverse countries. Ken has also studied Indian, Middle Eastern and African music and is a specialist on the Middle Eastern goblet drum, the doumbek. He also plays drum set, as well as Latin and African percussion.

Ken has performed countless times and has recorded close to 20 CD’s with groups from all over the world. 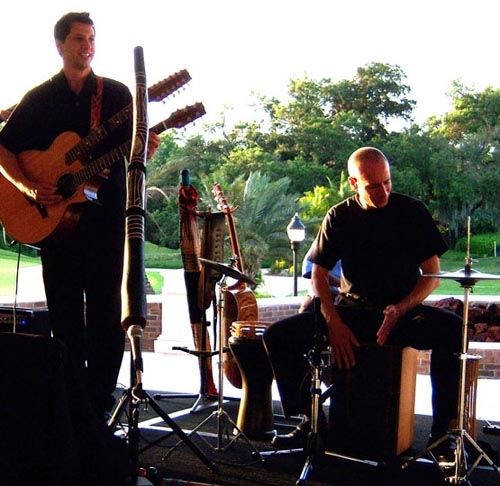