Formed in 1992, the Zachary Smith & the Dixie Power Trio has developed a reputation as the East Coast's premier "Louisiana variety band"-- capable of playing authentic sounding New Orleans jazz, zydeco, Cajun, street parade, and Louisiana-style funk. The four-piece trio (we blame Cajun math) has carved out a niche as a fun and exciting ensemble capable of entertaining audiences of all ages. The group has shared concert stages with many Louisiana luminaries, including the Neville Brothers, Terrance Simien, Dr. John, Wynton Marsalis, Chubby Carrier, Beausoleil, the Dirty Dozen, the Olympia Brass Band, Cowboy Mouth, Galactic, and John Cleary. The foundation of the Dixie Power Trio is bassist Andy Kochenour. He lays down the bass lines while Chuck Underwood dictates rhythmic and chordal directions on guitar. Riding on top of the grooves is leader Zachary Smith, playing cornet, washboard, accordion, harmonica, and just about anything else he can lay his hands on. Holding everything together is the fourth member of the trio, drummer Byron McWilliams, who also lends his vocals to the mix. The group sometimes augments the band with a rubboard player or extra horns (the New Line Brass). Listen for a set and you might hear the "DPT" tackle anything from Louis Armstrong to the Rolling Stones. Borrowing material from the Neville Brothers, Buckwheat Zydeco, Dr. John, Chuck Berry, Fats Domino and many others, the Dixie Power Trio has a knack for reinventing classics. At the same time, they take pride in the authenticity of their New Orleans jazz repertoire and original compositions. The common thread is that it's all good music. Give the Dixie Power Trio a listen - - you'll become a fan too! 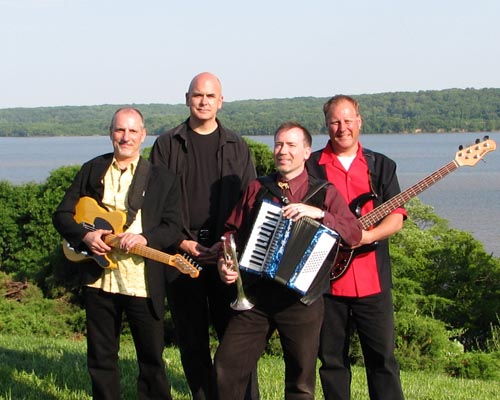