After years of doing all that it takes to develop a large fan base, including grass-roots promotion, touring, and releasing two albums, the Charleston SC-based Blue Dogs are in full stride with their third album, Letters From Round O. Produced by Cracker frontman David Lowery, who has also produced records for Counting Crows and Sparklehorse, the album is a natural progression for Blue Dogs' Americana-tinged contemporary rock which debuted on their self-titled album (1997) and inspired Charleston's Post and Courier to dub 1997 "The Year of the Dogs."

Primary songwriter Bobby Houck has found that the key to successful writing is writing what he knows. Throughout college and beyond, Houck's music has been an alloy of sounds from the southern landscape resulting in music that is at once folk, roots, blues and bluegrass that appeals to adventurous rock fans. The influence of artists such as Little Feat, Bob Dylan, and Tom Petty is immediately apparent yet serve as suggestions rather than blueprints for the Blue Dogs' style. It is the timelessness of their songs that is the constant.

For more than a decade, Houck and Futch performed throughout the Southeast out of various home bases in Virginia and the Carolinas, but lastly and finally in Charleston. When Greg Walker joined the band on drums, a rock outfit was born. After amassing numerous fans in Charleston, neighboring cities and as far as they could reach on weekend road trips, Blue Dogs got serious about their music and opted for a recording and touring career.

Racking up more than 400 live shows throughout 1997 and 1998, their momentum in popularity propelled them further along the backroads and interstates of America. They had seen the addition of David Stewart on guitar and Evans Nicholson temporarily replacing Walker, and on occasion calling for a fifth member to handle a keyboard. Hailed as "a piece of rawhide for Dogs fans to chew on," they released a live album, For the Record, to immortalize just one night in the life of this road-frenzied band. For the Record is a collection of three new songs, updated versions of a few songs from the self-titled CD, and two covers exemplifying their range of style, from Dylan's folksy ballad "She Belongs To Me" to a country-rock raveup of the Commodores' "Brick House."

Touring as far west as the Four Corners states by Fall of 1999, they were on their second set of wheels, having cruised by now over 200,000 miles of road in three years. In fact, on September 9 of this year (9/9/99) the tour van rolled 99,999 miles. John Lennon and numerologists may have their own theories, but to the Blue Dogs, it meant their sound was catching on.

With one of the most accomplished independent careers to their credit, the Blue Dogs begin to look to the future with their latest release Letters From Round O. Having sold over 4,000 copies in just four months, peaked the list of several retail sales charts, and remained near the top of Charleston’s modern rock station WAVF’s playlist with their single “Isabelle”, the Blue Dogs are poised for widespread commercial success.

Letters From Round O establishes the Blue Dogs as masters of contemporary roots rock. Showcasing the band at the peak of its craft, Letters From Round O accomplishes a seamless cohesion between contemporary rock and the band’s Americana roots. These are 11 tracks, ranging from the bluesy "Pay The Man" to more modern pop-rock songs such as "Sister" and the first single "Isabelle" to the down-tempo, rather stark but poignant "Bitter End." The tunes are "honest songs," says Houck. "They are very much us."

"Every now and again a CD by an unknown artist grabs me and reminds me why I’m in the music business…such an album is Letters From Round O…"
--John Schoenberger, ALBUM NETWORK

“A hurricane couldn’t douse the fire of “Isabelle” nor could it blow away the steadfast groove of “What I Want”. With David Lowery’s handy knob-twirling [the Blue Dogs] are dog-trotting towards success. Now will someone get them a major label deal?!?”
-Julia Trainor HITS MAGAZINE

““Isabelle” is very radio friendly and it is getting a very good reaction. These guys are a great bunch of musician and keep on getting more and more fans each year. We love playing them.”
-Danny V. WAVF96.1 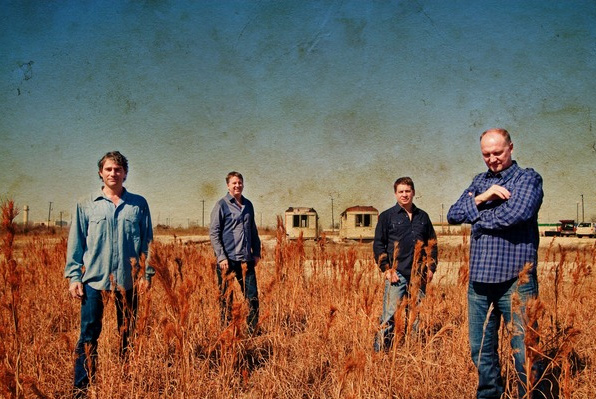