Imagine hearing the phrase, “Mornin’, sir. Glad to be here,” uttered to you in a deep, gravelly baritone by one of the most recognizable personalities in country music history. While I’ve worked with multiple celebrity artists over the years, I still feel a chill of excitement each and every time I’m on-site for an ECE National date. This event featuring Trace Adkins proved to be no different.

Held at the Patsy Cline Theater in Winchester, VA – a small town about an hour and a half from D.C. – the show was a benefit concert for the Winchester Education Foundation. Below is a behind-the-scenes look at the excitement (and blood, sweat, and tears) that surrounds a celebrity talent event.

5:15 PM – Arrived in Winchester after a 2.5 hour drive from Richmond. Head directly to the Patsy Cline Theater at Handley High School.

6:00 PM – Production load in begins. The gear is serious: speakers, long cords, and subwoofers the size of Priuses. The school’s electrician is unable to make it so the crew sets up all the gear so that all we have to do in the morning is plug and play. They ended up re-routing power from the football field’s scoreboard to accommodate the show!

6:30 PM – Ride with the client to Walmart to pick up various items like tablecloths, plastic utensils/plates, sweet tea, chips, and hand towels for backstage.

8:30 PM – Head to hotel to get some sleep. The day begins less than 12 hours from now and there are still a few t’s to cross before the AM.

7:15 AM – Arrive at Handley High School to find three busses and a semi truck already parked and ready to back in. Trace travels with a bus for his 10-person crew, a bus for his 6-person band, a personal bus, and a semi-truck packed end to end with gear.

7:20 AM – Annual “backing of the busses”. The school has a fenced breezeway about 100 yards long that separates one side of the building from the other. A door at the very rear of the breezeway offers direct access to the backstage area so the semi truck backed in first so gear can be offloaded and then busses backed in one by one to allow a private space, guarded by a uniformed police officer, for band and crew to go back and forth to hospitality area and stage.

7:30 AM – Gave Trace’s tour manager a tour of the venue and began placing signs around the venue. A dressing room downstairs under the stage was designated “Trace Only”, a teacher’s workroom was transformed into “Trace Adkins Production Crew ONLY”, and the stage door was marked “Backstage: Laminate Access Only”.

8:00 AM – The Patsy Cline Theater sits smack dab in the middle of Handley High School. Patsy Cline was a Winchester native and a lifelike cardboard cutout of her in a country western outfit holds a place of honor in the wings. Since the event takes place on a school day we had to take special care to work around the school’s schedule. We loaded in sound gear and lights between bell schedules, kindly reminded teachers and students that they would need to find alternate places to store their lunches and facetime with pen pals since we’d be using their workroom as a hospitality suite, and even had to pause all work during a “walkout” in honor of the Parkland shooting victims.

8:30 AM – Breakfast and coffee is served. Bleary-eyed crew guys and band members stumble off the busses and begin exploring venue. Cracker Barrel catering provided country home cooking and plenty of maple syrup which spoke straight to these Tennessee boys’ hearts.

10:00 AM – The doors to the semi truck are opened and load in begins. We have a local crew, plus Shenandoah University football players to act as loaders. Road cases containing band gear, staging, backdrop elements, lights, and sound equipment are numbered 1-49. Once case containing stage pieces weighed 1200 pounds!

12:00 PM – Lunch is served. Trace’s crew and band enjoyed hot soup, Philly cheesesteaks, and grilled hot dogs from the Piccadily Public House restaurant in Winchester (a local landmark). Trace did emerge from his bus to grab a quick bite after the rest of the crew had cleared out. He had a ball cap pulled low as I walked up to introduce myself. I said, “Mr. Adkins, I’m the event producer today and we are thankful to have you here. Please let me know if there’s anything I can do to make you more comfortable.” With a quick handshake and a rumbling, “Glad to be here,” he headed back to his bus.

1:00 PM – Sound system and lighting tuning begin. Spotlights mounted high on the ceiling were focused one by one on where band members will be standing. A crew member was responsible for standing behind each instrument and fine-tuning the amount and direction of light for each band member. The lighting director spent 30 minutes digging through various colored “gel” sheets and finally selected some reds, purples, and blues that would balance the white light of the spotlights on stage.

3:00 PM – The stage is fully set. Band members arrive for sound check and begin noodling on guitars, tuning drums, and talking about the song list. The band’s keyboard player serves as the musical director and had the band run through a few trouble spots in the set for practice. He sang Trace’s parts and while they played, the lighting director began programming the moving lights and stage backdrops for the performance later that night. Trace remained on the bus until minutes before the first note was played at 8 PM and the first time he touched a guitar was onstage during the first song! He obviously trusts his team and most guys said they’d been with him for over a decade.

5:00 PM – Dinner is served for band and crew. Carabbas brought a full spread of lasagna, pasta, salad, their infamous bread with olive oil, and meatballs in red sauce. Most of the band ate early and then headed back to the busses to change into their stage attire. The crew ate quick and got back to tuning guitars and preparing the stage.

7:00 PM – Doors open. The entire lobby is packed and a line snakes the length of the high school and out the door. A country music playlist is piped into the lobby and attendees excitedly shopped for Trace Adkins t-shirts, posters, custom license plates, and CDs. One couple even paid close to $500 for a signed acoustic guitar and a chance to meet Trace after the show!

7:30 PM – The 30-minute Meet & Greet with Trace begins. Twenty VIP sponsors got the chance to shake Trace’s hand and get a photo. He greeted each with a, “Howdy, ma’am,” or, “Howdy, sir,” and a tip of his large black cowboy hat.

8:00 PM – The band is in place and starts intro. I wait side stage with Trace and his tour manager. The lights go dark and Trace takes his place in front of the mic. The lights come up as a sold-out crowd lets out a deafening cheer. During the show, Trace picks up his acoustic guitar for several songs, tells stories and meanings behind some of his most popular songs, and jokes on his band members for things like having wrinkled shirts. He makes a special point to reinforce the importance of education and fundraisers like the Patsy Cline Classic.

9:15 PM – Trace ends his set with an encore, a quick wave, and a backstage exit. I was waiting backstage and as he exited he shook my hand, thanked me for bringing him in, and said: “I hope they got their money’s worth.” The second the auditorium clears the crew begins breaking down equipment and packing up the cases they emptied just a few hours earlier.

12:00 AM – The final case is loaded into the semi-truck and the doors are shut. The band and crew board their buses.

12:15 AM – The buses pulled out of the breezeway and head for the open road. The band bus, crew bus, and semi were headed back to Nashville. Trace and his tour manager were headed to the airport to rejoin Blake Shelton on his arena tour in Columbus, OH.

I slowly walked back to my car sitting in the empty high school parking lot. I made the short drive back to the hotel across the street from Shenandoah University. I was barely able to get my shoes off before falling asleep with the words to “Honky Tonk Badonkadonk” scrolling through my mind… 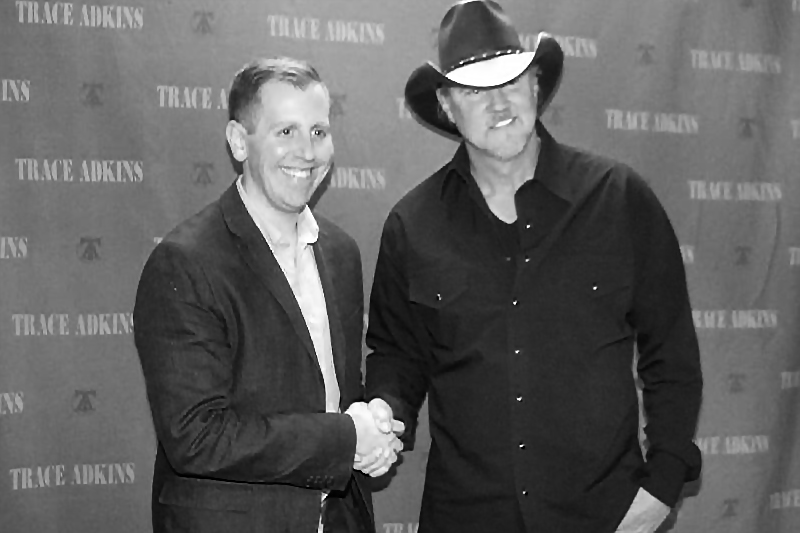