Tropical Steel is an Atlanta-based group comprised of musicians from various parts of the Caribbean performing reggae, calypso, and other Island-flavored music featuring steel drum.

In addition to playing in and around Atlanta, Tropical Steel has performed at resort hotels and festivals in Myrtle Beach, Hilton Head, Jekyll Island, Miami and most recently, City Stages Festival in Birmingham, Alabama. They also opened for recording artist Jimmy Buffet at the Lakeside Amphitheater during his national tour stop in Atlanta and was a crowd favorite at the Montreux Atlanta Music Festival in Piedmont Park, Atlanta, during Labor Day celebrations. Just recently, Tropical Steel released an album entitled Music of the Caribbean featuring favorite Island songs.

A limbo show is available, upon prior arrangement, featuring one of the foremost limbo dancers from the Caribbean, Claude Fabien. Mr. Fabien has performed throughout the West Indies and the United States, and recently completed a well-received Las Vegas engagement.

While Tropical Steel can play soft background music, which we find particularly appropriate during a dinner set, you know it is party time when Claude pulls out those limbo sticks and asks, "How low can YOU go? 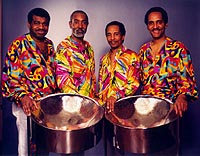