Memories of Mayberry: When not patrolling the streets of Mayberry, Barney and Gomer can be found mingling with the crowds at various events all over the United States and Canada. But no matter where they travel, they always come prepared with the Mayberry squad car, and Barney's lone bullet (which he usually keeps in his pocket but takes pleasure in showing it). Both Barney and Gomer love mingling with the crowds, signing autographs, taking photos of fans, and generally having good, clean, down-home fun. But even when having fun these two lawmen are mindful of their public safety duties and will pass out tickets for things such as jay-walking to the crowd as needed.

Scott "Barney" Epperson is a "dead ringer" of the bumbling deputy of Mayberry. He looks, walks, talks and acts as only Barney can, and always reminds people to "nip it in the bud". Scott is a well-established theater actor experience in radio, television commercials, promotions and music videos. He has also been in shows with some of the biggest names in the entertainment business. Bruce "Gomer" Newman walks, talks and acts just like the part-time lawman of Mayberry and full-time mechanic at Wally's Filling Station, right down to his signature "Shazam". Bruce is a talented musician and theater actor who has been involved in television commercials, videos and has entertained with some of the biggest names in the business. When teamed up with Barney, hold onto your funny bone because you're in for loads of laughs and a great time! 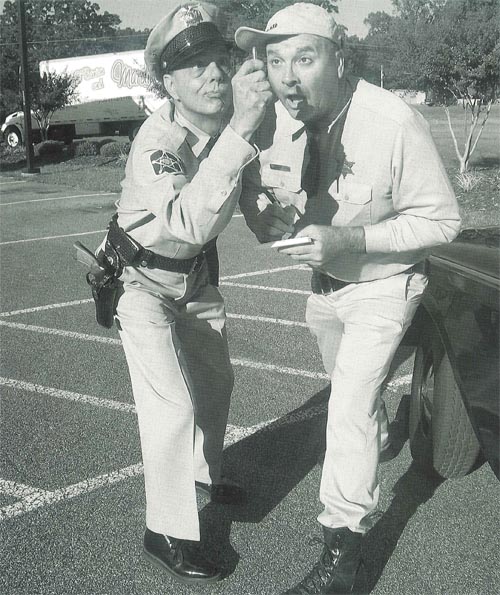 Ask questions, check availability, and get pricing information for MEMORIES OF MAYBERRY