For as long as I can remember, I have been singing. By the time I went to high school (1973-1977), a few friends and I started a band that played pop and rock 'n roll music for school dances. I also did a little acting in a few high school play productions.

In 1977, I went to MCC College in Edison, N.J., to study hotel/restaurant management, but spent most of my time jamming in the student lounge. When the guys heard me sing, they introduced me to "Condit Atkinson", the college music professor and arranger/conductor of the 25-piece jazz big band. He asked me to join the band as its boy singer, and I agreed. I was 19 years old and we performed for audiences of 500 to 5,000. I performed with them until 1988.

In 1979, I decided to take some voice lessons. My teacher turned out to be J.T. Carter, who was the original bass singer in the 1950's group "The Crests" of which "Johnny Maestro" was the lead singer. Through J.T. I met "Joe Caroselli" now a long-time friend and associate, who was the drummer for the group "Looking Glass" who had the 1972 hit song "Brandy, You're a Fine Girl". Joe was working with a local agent that was booking weddings. So, in 1980, I started performing at weddings, dinner dances, award shows, restaurant/lounges, and night clubs doing everything from "standards to top 40," working with studio and road musicians in bands as small as a trio, and up to 10 pieces. During this time I also worked with "Alan Quinn's Big Band" performing in large halls, auditoriums, and nightclubs. This was a 22-piece orchestra.

Simultaneously between 1983 and 1987, I worked with the Joe Kurasz studios and production company in Rahway, N.J., recording radio commercials, jingles, voice-overs, and voice tags for local radio which aired on AM and FM stations in the New York/New Jersey metropolitan area.

In 1991, I moved to South Florida to do the cruise ship circuit, but changed my mind and joined the 50-member choir of St. Mark's Catholic Church in Fort Lauderdale. In addition to Sunday services, we did Broadway-style stage shows and concerts to raise money for the church. In 2000, I began taking tap dance lessons to improve upon what I already knew about it.

In 2001, I met the well-known local/national/international pianist, Billy Marcus, and from 2001 to 2004, I did appearances with him and various other musicians at local venues in the Fort Lauderdale area, "1 Nite Stans", "Ellington's", "Ohara's on Las Olas". I also performed at "Jazziz at the Seminole Hard Rock" a number of times with the Mark Marinaux trio. Between 2006 and 2007, from time to time I would do guest appearances at the Polo Club restaurant/lounge in Wellington, Florida, with pianist Larry Brendler. I've had the pleasure of performing with some great local artists including Billy Marcus, Duffy Jackson, Jeff Carswell, Eric Allison, Mike Harvey, Mark Marinaux, James Cotmon, Jesse Jones Jr., Dolph Castellano, Rances Colon and Nicole Yarling to name a few; and many others.

Starting in 2007, I began production on two shows and have been performing them since June 2009. I have performed the shows in some great South Florida venues, including The Deauville Hotel on Miami Beach, The Eden Roc Hotel on Miami Beach, The Broward Center for the Performing Arts in Fort Lauderdale, The Bienes Center for the Arts in Fort Lauderdale. I recently added a new show to the line up in January 2013.

Below is a brief description of the shows:

"A Swingin' Evening of Entertainment" is a show that combines my talent and the talents of many other people. Structured like a live television broadcast, performed before a live audience in a supper club setting with dining and dancing, or as a stage show in regular theatres. It is a show of variety, with a 17-piece orchestra, and sets the performers against a large band background for most of the performances. The show includes myself and a female vocalist, hot show dancers, stand-up comedy from local and national talent, and a variety of special guest artist's along with a variety of music, all on stage before a live audience. People attending the show can dance when the band is playing in the dinner theatre setting. This is a 2-hour show.


"An Evening at The Copacabana, a Latin-American Show" is a stage show with a Latin flavor, reminiscing the days of the famous Copacabana night club and its many performers. We mix the excitement of Latin dance rhythms and the intensity of the big band swing music, along with some ballads from the Great American Songbook, to create the dynamics in this show.

This new show features the Copacabana Orchestra, which is a 10-piece Latin band outfitted in tropical tuxedos, along with myself, a female vocalist, the famous Copacabana showgirl dancers, a stand-up comedian, and amazing special guest artist(s) honoring the many different stars that performed at the Copacabana. This is a 2-hour show.

Some of the famous artists that performed at the Copacabana include Frank Sinatra, Louis Armstrong, Nat King Cole, Peggy Lee, Ella Fitzgerald, Desi Arnaz, Xavier Cugat, Carmen Miranda, Tony Bennett, Sammy Davis Jr., Dean Martin, Jerry Lewis and many others. We do not salute all of these artists in every show. It will vary based on availability of performers. This is a variety show with a mix of Latin dance music and American swing and dance music.


"An Evening with Mark Fernicola" is an intimate one-man show using an 8-piece jazz style band comprised of piano, upright bass, drum, vibes, guitar, trumpet, trombone and saxophone. The show is a performance of great songs from jazz and swing to blues, ballads, contemporary and Latin numbers. I incorporate a little song and dance along with some comic routines and great music from artists such as Frank Sinatra, Tony Bennett, Mel Torme', Nat King Cole and Michael Buble.

All of these shows can be performed in dinner theatre-style venues or as a stage show for regular theatres.

All of the shows are available nationally for clubs, hotels, lounges, corporate events, private events, weddings, dinner dances, etc. Any of the bands can also just play music along with vocals, without the show. 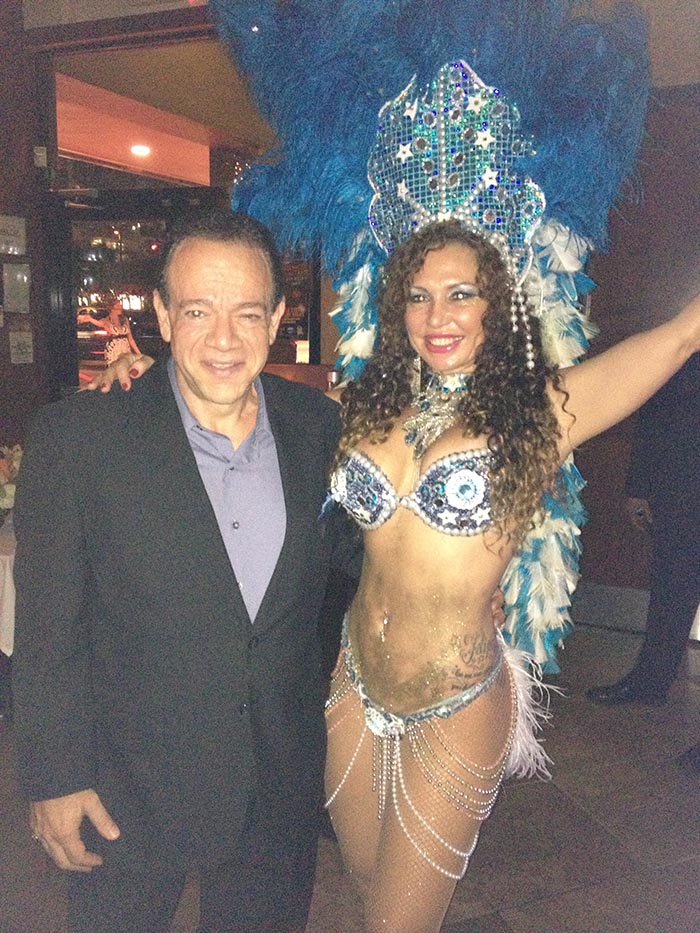 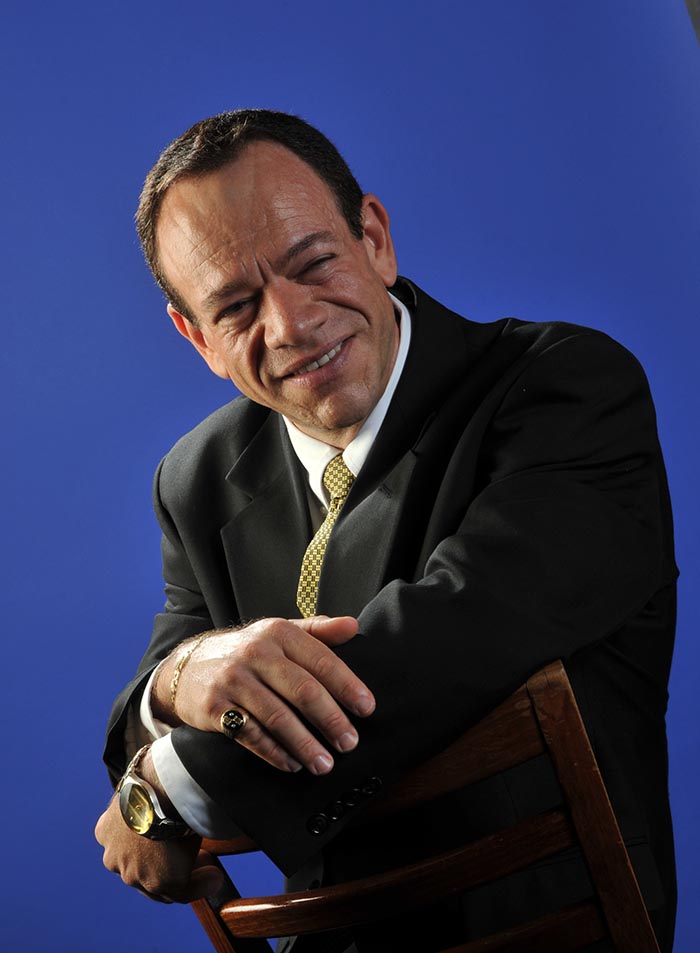 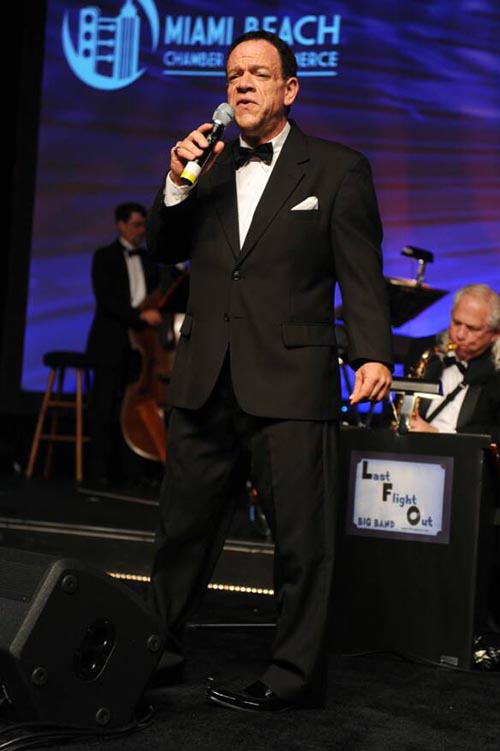 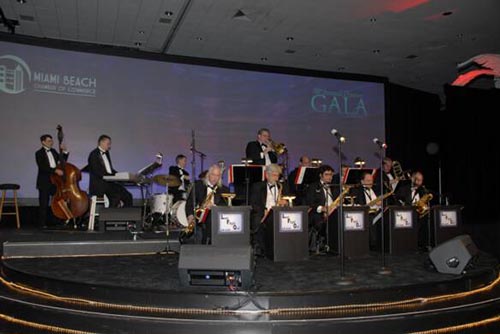