Mariachi Las Estrellas is featured at the Spring and Fall performances of Quetzales Mexican Dance Ensemble. Mariachi is the most exciting and enchanting music in the world that has come to identify with Mexico. Mariachi Las Estrellas ensemble has established itself as one of the most outstanding performance groups based in the Nation's capital, performing to audiences which have included diplomats and and governmental dignitaries, television personalities, professional athletes and lovers of folkloric music.

Wearing the traditional Traje de Charro, the group weaves musical harmonies and rhythms as colorful as the serapes of that Mexico is famous for. They showcase the musical and rhythmic variations which have developed in the different regions of Mexico from both a historical and cultural perspective. And, in the tradition of the Mariachi, they are able to perform request on demand.

As masters of their instruments, they expertly combine the contrasting sounds of the violin, the sharp brassiness of the trumpets, the deep voice of the Guitarron and the high-pitched voice of the vihuela with a result that is the heart and soul of Mexico.

Performing a midnight serenade under a bedroom window, a wedding or birthday, Mariachi Las Estrellas helps celebrate the major milestones in the lives of all people.

MEANING OF THE WORD "MARIACHI"

The explanation that appears most frequently, especially on record jackets and in travel brochures, is that the word is a variation of the French word "mariage", meaning wedding or marriage, and comes from the time in the nineteenth century when Maximillian, a Frenchman, was Emperor of Mexico. According to this myth, the mariachi was named by the French after the celebration with which it was most commonly associated. But this explanation, always regarded as highly doubtful by linguists, was totally discredited recently when a use of the word was found that predated the time when the French arrived in Mexico.

Currently, the best scholarly opinion is that the word Mariachi has native roots. One theory is that it comes from the name of the wood used to make the platform on which the performers danced to the music of the village musicians. But whatever its true source (and the truth may never be discovered with absolute certainty) the word today has one meaning that is crystal clear: Mariachi is one of the most exciting and enchanting musical ensembles found anywhere in the world today. 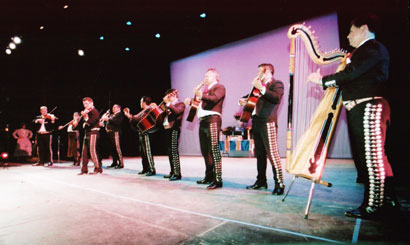 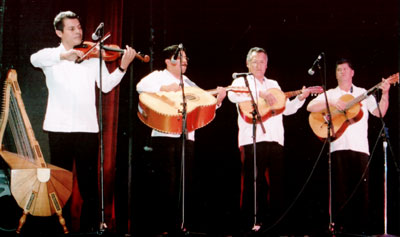