The East Coast's premiere Reggae/Island Party band, JAH Creation brings an irie vibe with some of the best roots reggae music around. A full time tour de force, JAH Creation runs the circuit between the Florida Keys and the Jersey Shores, averaging 200 shows a year. Sweet Harmony Vocals, combined with Thumping Drum and Bass, and featuring the revolutionary "One-Man Horn Section," JAH Creation is sure to keep the party rocking. Whether its a Wedding, Corporate "Caribbean-Theme" Party, University/College Event or a packed Nightclub, JAH Creation has performed for every type of audience and situation. No matter what age, race, or creed, everyone seems to love their original songs, as well as the classic covers that they perform. They have shared the stage with some of the biggest reggae acts in the world, including Culture, Israel Vibration, Yellowman, Steel Pulse, Third World, Burning Spear, Eek-A-Mouse, and The Wailers. The band has also appeared in two feature films produced in the Cape Fear area entitled Ulterior Motives, and Retribution, released in 2002. In addition, vocalist Jimmyjams has appeared on The WB Hit show "One Tree Hill" in a recurring role, in a national ESPN commercial, and various other film and TV spots. Tracks from their CD's are being heard all over the East Coast, from Key West, FL to Charlotte, NC to Baltimore, MD to NYC, and all over the world via Live365 internet radio. The band is available as a 4 or 5 piece, and also as a duo for smaller events or smaller budgets. Whatever the situation, the band's mission is to bring the people positive music, irie vibes, and to spread the message of Love, Respect, and Unity. 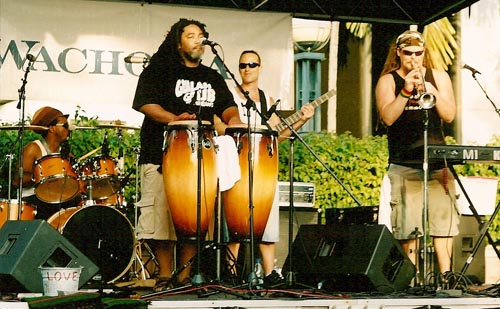 JAH Creation really showed that they practice their craft...This is how live reggae music should sound.  -Carolina Caribbean Connection Magazine

One of the most popular regional bands that I have ever had the pleasure of working with… these guys absolutely, positively rock.
-"The Night Nurse" Ki...

JAH Creation played one of the best performances at Marrz Nite Club according to the response from the crowd (which was a couple hundred people)…had m...

Critique of "Babylon Fall": The band sounds excellent, the vocals are superb & the track grooves great...well-crafted and heartfelt.  -TAXI (INDEPENDE...