Since its formation in 1996, Hard Day's Night has been entertaining music fans across the country and steadily earning a reputation as one of the nation's premier tributes to the greatest band of all time, the Beatles. Hailing from the rock 'n roll city of Cleveland, Ohio, the band performs selections from the entire Lennon/McCartney songbook with the same vigor, spirit and accuracy as the Beatles themselves did. Donning exact replicas of the Fab Four's attire and classic instruments, Hard Day's Night recreates the magic of the Beatles in character on stage as John, Paul, George and Ringo, using the same cast from show to show.

Hard Day's Night invites audiences on a journey through the lives of the world's favorite four lads from Liverpool. They begin with the black suit Sullivan Era, as four boys take the world by storm, giving rise to Beatlemania. The crowd will then be ushered into the birth of stadium rock reliving Shea Stadium and the outdoor concerts of 1965 and 1966. Hard Day's Night takes you through Sgt. Pepper's Lonely Hearts Club Band, the album that changed the face of rock 'n' roll, just as the psychedelic 60's changed the planet. The trip culminates with the Beatles' late studio years, which cemented the band's legacy as the greatest group in history.

Through its musical talent and dedication to authenticity, the group is one of the few touring Beatles tribute bands to be invited to perform at the world-famous Cavern Club in Liverpool, England during International Beatles Week. Their tour in England included an appearance with Pete Best, the Beatles' first drummer, at the Casbah Club.
Hard Day's Night has had the pleasure of performing for thousands of Beatles fans in England and the United States, including such national clients as Continental Airlines, Hard Rock Cafe, Hilton Hotels, Volkswagen of America, and the American Heart Association. Television clips featuring the band have appeared on FOX, PBS and CBS, and the group has appeared with such noted British Invasion performers as Peter Noone and Herman's Hermits and Billy J. Kramer, as well as Tim Piper, nationally known John Lennon impersonator.

Hard Day's Night is privileged to recreate and perform the iconic music of the Beatles for fans young and old and thrilled to introduce a whole new generation of Beatles fans to the excitement of a Beatles concert! They are dedicated to keeping Beatlemania alive in one of the most authentic stage tributes seen today! To experience a Hard Day's Night show is to relive the magic and wonder of the band that changed a generation - The Beatles! 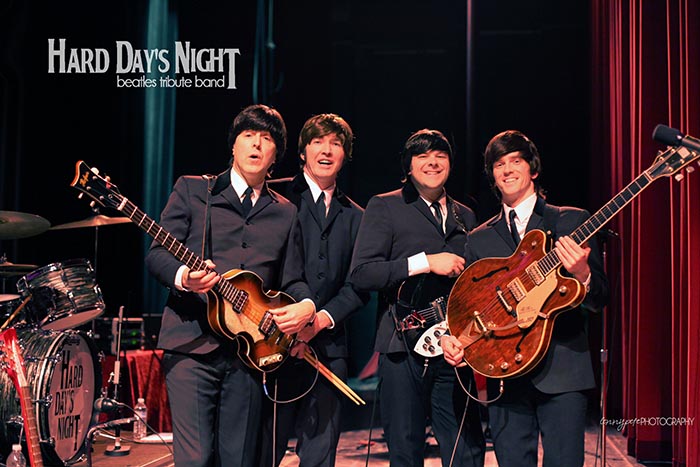 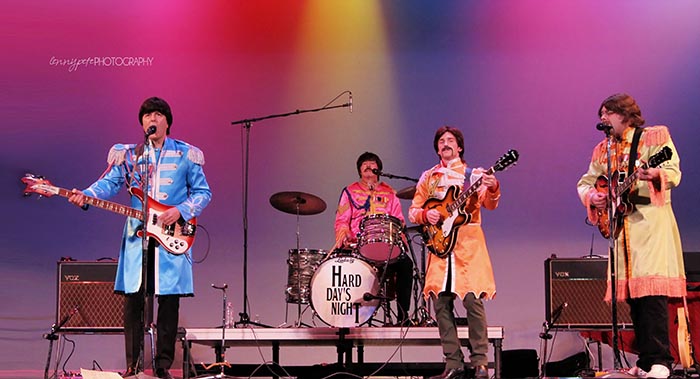 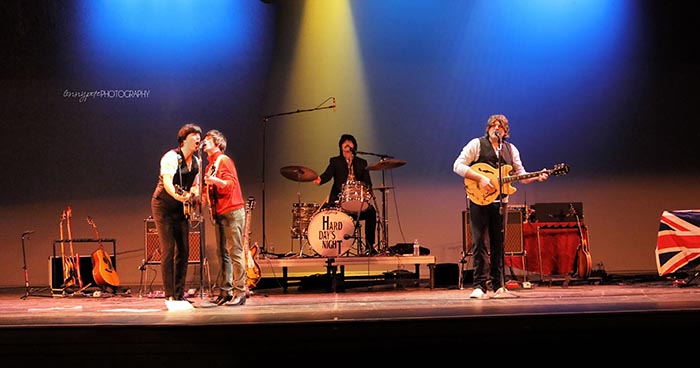 Hold Your Hand
She Loves You
Saw Her Standing
Hard Day's Night
Can't Buy Me Love
I Feel Fine
Help!
Day Tripper
Beethoven
Twist and Shout
Long Tall Sally
Please Please Me
Do You Want to know a Secret
This Boy
You Can't Do That
I Should Have Known Better
Happy Just To Dance With You
And I Love Her
8 Days A Week
Act Naturally
I'm A Loser
She's a Woman
Ticket To Ride
The Night Before
Norwegian Wood
Nowhere Man
And Your Bird Can Sing
In My Life
Paperback Writer
Taxman
From Me To You
It Won't Be Long
All I've Got to Do
Any Time At All
Tell Me Why
If I Needed Someone
No Reply
Wait
Sgt. Pepper
Little Help
Lucy In The Sky
Magical Mystery Tour
Blackbird
Yesterday
Let It Be
Hey Jude
USSR
Revolution
Get Back/The End
All You Need Is Love
Penny Lane
Something
Birthday
One after 909
Come Together
Yellow Submarine
Obla Di Obla Da?