Forrest's sets tend to include a little bit of everything. House, funk, 80s, classics top 40 and brand new soon to be hits. Whether a corporate job or a club gig his music has something for everyone. Tomato Slice spends much of his time finding, creating, editing and remixing audio and video. In his own words: "I find it difficult to stand out from other DJs because most DJs play the easy to find versions of tracks. They don't put the homework in, they all sound the same." Rarely taking the time for a break his sets are filled with energy. "I like to work really fast and by putting songs on top of each other. The crowd knows and the energy isn't lost. One thing no one can say is that I am lazy."
Tomato Slice started his career in Colorado where a heavy love of all music came together with the thriving dance scene. Playing in front of thousands he was able to blend many styles of music and read a crowd's reaction. "I would notice they loved it when a familiar classic track was blended with something new. This lead me to believe that any track played in a good way at the right time could get people excited."

After a move to North Carolina his sets started taking on a more rock influence. "I looked at what was happening to the club scene. Hip hop was taking over but a lot of music was being lost or forgotten. I don't see a difference in genres. That came from my studies as a DJ. In the early years of hip hop people had to find the music to sing and dance to and much of the time it was the heavy beats of rock. So why shouldn't that apply to the modern dance floor?"

Taking knowledge gained from different music environments, Forrest forms a creative DJ set with something just about anyone will love. "I just love music and when playing an open format people are going to hear a lot."
Staying ahead of the curve has always been his forte. Video mixing is becoming more popular and Tomato has been doing it for years. All of his sets contain never before seen remixes and exclusive visuals. "I love working with video. It's fun, modern and stylish. My freedom to mix has expanded with video. It opens new possibilities, the sky is the limit." 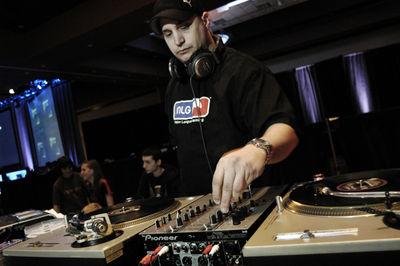