Craig Karges is truly extraordinary! The "extraordinist" is an award winning entertainer, a nationally recognized speaker and an author. He has made over three thousand appearances on three continents and in all fifty states.

Craig Karges' performance is an extraordinary blend of mystery, humor, psychology and intuition. Karges dazzles the mind as he challenges his audiences to question what is real and what is unreal, what is possible and what is impossible. Dennis Miller, comedian and talk show host, put it this way after seeing Karges perform, "this weirds me out."

A table "walks" on stage and then flies into the air! Borrowed finger rings from audience members are linked together in a chain! Thoughts are read and predictions are made and verified. Craig Karges risks his fee in a special demonstration. If he fails the money is returned to the sponsor!

Craig Karges dramatizes the unknown, the unexplained and the unbelievable. You don't just watch this performance, you experience it, through total audience participation.

Audiences may be mystified when it comes to understanding how Craig Karges accomplishes what he does on stage but his popularity is no mystery at all.

From the entertainment oriented "Tonight Show with Jay Leno" to the news oriented "Larry King Live," Craig Karges makes frequent guest appearances on national television shows. He has also appeared on Lifetime Television, Fox News Channel, TNN, CNBC, United Paramount Network, CNN Headline News and E! Entertainment Television. The sheer number and diversity of Karges' television appearances is indicative of his widespread popularity. His success in the television medium led to him starring in his own one hour television special - "Experience the Extraordinary!"

Performance, the international touring talent weekly, named Craig Karges' touring show one of the top five variety/family shows in the country. Karges was in good company as the list also included the likes of illusionist David Copperfield and Walt Disney's World on Ice. Performance magazine called the extraordinist's show "The next era in mystery entertainment."

Craig Karges first became popular touring college campuses. He was named Entertainer of the Year six times by the National Association for Campus Activities and three times by Campus Activities magazine. Past NACA award winners include Bruce Springsteen, Alabama and Jay Leno. In addition to Entertainer of the Year, Karges was named the most popular variety entertainer on the college circuit for twelve consecutive years as well as being named Best Male Performer and Best Performing Arts Attraction.

Even Craig Karges' peers find his work fascinating. He was named the top performer in his field worldwide by the International Psychic Entertainers Association. The National Speakers Association (NSA) honored him with the Certified Speaking Professional (CSP) designation, a recognition bestowed on less than 10% of the NSA's almost 4,000 members.

Craig Karges says that he does not possess supernatural powers, nor does he claim to perform as a psychic or a magician. While he acknowledges that he is an entertainer, and showmanship plays a role in what he does, he insists that he does not prearrange anything with members of the audience. Skeptical? Craig Karges has a standing offer of $100,000, payable to charity, if anyone can prove he uses stooges, confederates from the audience or hidden assistants to accomplish his demonstrations.

Corporate giants such as IBM, McDonald's, General Motors and General Electric have relied upon Craig Karges and his unique brand of showmanship not only to entertain their employees and clients, but also to motivate them. "Ordinary people are capable of extraordinary results because we all possess extraordinary capabilities. I communicate that message both verbally and visually," Karges says.
|
In a shift of focus from entertainment to empowerment, Craig Karges created "The Intuitive Edge" workshop. This one-of-a-kind presentation does more than simply amaze and entertain. Participants learn memory techniques; their intuition is tested; and they are taught how to tap into their unconscious mind to enhance their creativity, intuition and decision making. "The Intuitive Edge" allows participants to experience greater personal power and to achieve success more easily.

The Wizard's Legacy - A Tale of Real Magic by Craig Karges with Jon Saint-Germain is Craig Karges' second book and marks his debut as a novelist. The Wizard's Legacy is a work of inspirational fiction which uses magic as a metaphor for life's mysteries and documents the student teacher relationship Craig had with his enigmatic great-uncle, Alain "Doc" DeLyle, who taught him his special brand of magic of the mind.

Craig Karges' performing schedule has taken him half way around the world, appearing at corporate events, theaters, universities, showrooms, festivals and performing arts centers. "No matter where I perform I try to make my audience feel they are a part of something they have never experienced before and hopefully will never forget. My goal is to entertain people through the creation of mystery and to get them to open their minds to greater possibilities," says Karges.

In the uncanny world of Craig Karges there is no smoke and no mirrors, just an enthralling personality and a powerful. 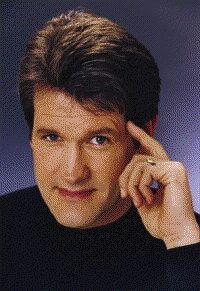