The members of The Atlanta Drumline have been featured in many venues, including the 1999 NFC Champion Atlanta Falcons Parade, the Tom Joyner Morning Show, the Twenty-Fifth Anniversary of Home Depot, and numerous concerts. They have collaborated with known personalities, including the SOS Band. They have been featured during the half-time festivities of Atlanta Falcons and Atlanta Hawks home games. The talented musicians have been featured in the gospel video, "Highly Recommended" produced and directed by Darryl Lassiter, and the movie, Pay the Price, which was released on video and DVD on December 10, 2002. The members of The Atlanta Drumline collaborated with music mogul, Dallas Austin, and are featured in the 20th Century Fox movie, Drumline. In this movie, the percussionists were members of the fictitious "Atlanta A & T Band." Also as members of the world-renowned Clark Atlanta University Band drum section is featured as the fictitious "Delta A & M" percussion section, which ignites sparks with the Atlanta A & T percussion section and world-renowned Morris Brown College percussion section. Drumline and Pay the Price were shot on the historic campuses of Clark Atlanta University, Morris Brown College and the Georgia Dome.

Although this Drumline is relatively new, the members have been very active participants in bands that have performed in Atlanta and throughout the United States. This new Drumline is quickly being noticed and recognized for its precision and professionalism. Look out! The Atlanta Drumline may be coming to a neighborhood near you! 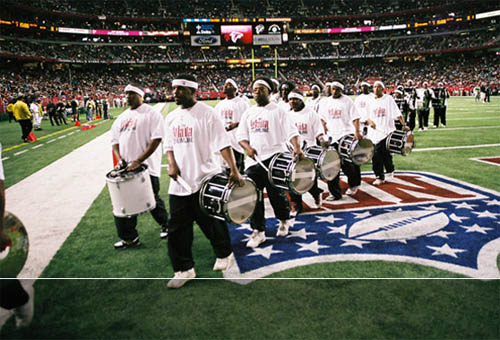